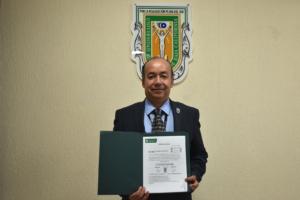 tjuana. The Director of the College of Chemical Sciences and Engineering (FCQI) of the University of Baja California Autonomous (UABC), Tijuana Campus, has been appointed as Principal of Instructor Roberto Alejandro Reyes Martinez, who has been voted on by board members to guide this academic unit in 2022-2026.

The chairman of the board, Dr. Gabriel Estrella Valenzuela, read the appointment law and protested against the director. In addition to his congratulations, he urged him to join hands with all the faculty members under his administration so that together they may continue to raise the prestige of this academic unit. He added that he would later present a series of recommendations to further enhance the work done in front of the university community and society in general.

To attend the swearing-in, attended on behalf of the UABC President, Dr. Daniel Octavio Valdez Delgadillo, Vice President of the Tijuana Campus, teacher Edith Montell Ayala, who endorsed the support of the Office of the Rector and Vice-Chancellor of the University. office so that administrative functions are fulfilled. He congratulated the other members of the list, Dr. Ana Alejandra Ramirez Rodriguez and Professor José Jaime Esquida Elizondo, because their participation enriched the recruitment process.

Finally, teacher Reyes Martinez thanked the Board of Directors for their trust in him to guide the FCQI for the next four years. Likewise, he asked for the support of those who make up this academic unit so that they join forces and skills for mutual benefit.

Professor Reyes Martínez studied Control and Automation Engineering at the Graduate School of Mechanical and Electrical Engineering at the National Polytechnic Institute (IPN), as well as a Master of Science with a specialization in Digital Systems at the IPN Technology Research Center. He has served as Interim Director of the FCQI since August 2021, where he was also responsible for various academic coordination and served as Professor. He has several investigations and publications in specialized journals.