Hurricane Elsa hit the southern group of the Lesser Antilles and crossed in the morning around Barbados, Saint Vincent and Saint Lucia, and entered the waters of the eastern Caribbean in the afternoon.

Elsa continued to gain somewhat more intensity and Now the maximum sustained winds are 140 kilometers per hour, with higher gusts, central pressure drops to 991 hectopascals and is moving west at 30 mph.

At 6 p.m., the center of the hurricane was estimated at 14.3 degrees north latitude and 64.1 degrees west longitude, a location that puts it in the waters of the eastern Caribbean Sea about 340 kilometers northwest of San Vicente and 770 kilometers southeast of the country. Santo Domingo, Dominican Republic.

Within the next 12 to 24 hours, the hurricane will continue with the same path and translation speed, tilting its way back to the northwest, with a slight change in intensity, to move tonight across the eastern Caribbean south of Puerto Rico and tomorrow Saturday, to approach the southern coast of Hispaniola by noon, to approach Jamaica and the southern coast of the eastern provinces on Sunday morning.

Given the forecast course of this hurricane and the time of year, the forecast center of the Meteorological Institute is closely monitoring this tropical object, due to the potential danger it poses to Cuba.

The next tropical cyclone warning will be issued at midnight. 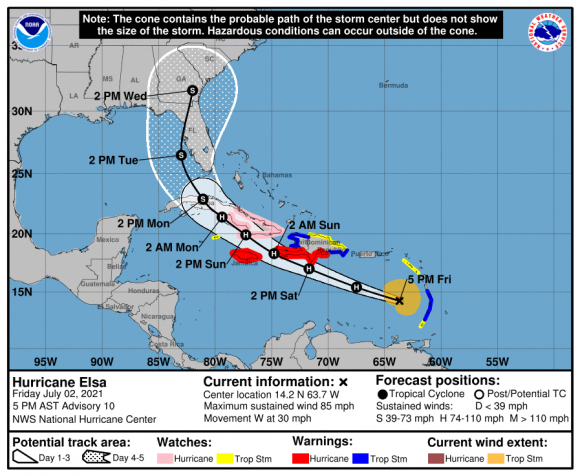 (With information from the Meteorological Institute) 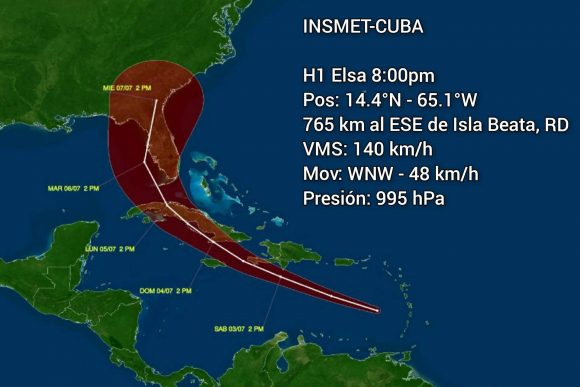 Elsa continues as a Category 1 hurricane with maximum sustained winds of 140 km/h. It is expected to continue to gain more organization and intensity to approach southern Dominican Republic and Haiti tomorrow and Sunday to southeastern Cuba. Elsa is a potential danger to Cuba, so you must remain prepared and vigilant.