Morocco’s Guelmim-Oued Noun region, which has a coast close to the Canary Islands, will be by the end of this decade. 10.5 GW Solar and Wind Power Plant. This energy, however, will not be for Morocco, it will be It is sent directly to the UK via a submarine cable that borders the coasts of Spain and Portugal. The largest submarine cable in its class.

About Morocco Energy Project – UK by Xlinks, a British company seeking Save 8% of the energy needed in the UK with this cable from Africa. Specifically, four high-voltage cables with a capacity of 1.8 GW. It will be the longest in the world and will cover about 3800 kilometers under water. Another that we can say is “close” is Israel, Cyprus and Greece with a length of 1500 km.

To keep up with the numbers, the solar and wind power plant is expected to have an area of ​​about 1,500 square kilometres. 7 GW will be solar energy and another 3.5 GW will be wind. The station will be connected exclusively to the UK, although 20 GWh/5GW batteries will be installed in Morocco for energy storage. Xlinks says the project will power 7 million homes in the UK By 2030. That means 8% of the energy Britons need.

There is a reason for Xlinks to place his speeches in Morocco and nowhere else. They say that this region of Morocco has the third highest global horizontal radiation (GHI) in North Africa. In other words, Available sunshine hours Every day throughout the year. On shorter winter days it gets 10 hours of sunshine. This is Ithis 20% more than Spain and twice that of the UK. 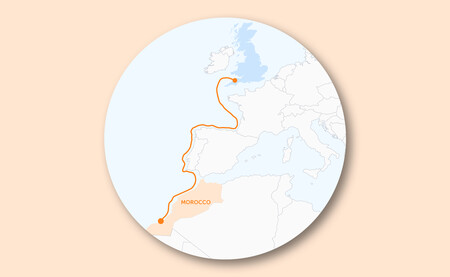 There is quite a bit of extra performance for Xlinks in Morocco and it’s worth it Investing about 20,000 million euros in the construction of this project. It will take a few years, and the first cable is expected to be completed by 2027 and two years later the other three cables.

The structure leaves the coast of Morocco and travels through the entire country until it approaches the north off the coasts of Huelva and Portugal. From there it challenged all of Portugal to Galicia, the entire Cantabrian coast into Spain and even Spain. From there he ascends to the United Kingdom. An ambitious project linking both countries, Figuratively speaking, he brought the sun to Britain.