Glasgow, November 3 – Hundreds of people demonstrated this Wednesday in the main streets of the heart of this Scottish city to protest against “eco-environment” or the environmental hypocrisy of governments and big business, in an generally peaceful demonstration that resulted in two arrests, EFE said.

The protest, organized by the activist group Extinction Rebellion, took place in a festive and vengeful atmosphere a short distance from the headquarters of the COP26 climate summit, which is being held here until November 12.

“They are the world’s largest investors in fossil fuels, which is why we are here today, even though they are now announcing investments in clean energies,” Mark Douglas told EFE.

“I’m here to take a stand against people who say one thing and then do another,” John Smith told the agency, something he “has been doing 30 or 40 years ago” on the issue of climate change.

“I want to protest against the hypocrisy of companies and governments,” said Gabrielle, a Frenchwoman. “We bring activists from all over the world to call for real action,” he added.

The bureau explained that Ecoposture is the false commitment that major companies claim to have to society, while their practices continue to harm the environment, as defined by environmental group Extinction Rebellion.

Before the start of the march, the demonstrators met and different speakers had the opportunity to denounce the different sectors that practice this hypocrisy.

Activists chanted slogans such as “What is the solution: revolution” or “Without justice no peace”, activists also chanted “No more ecological situation, no more idiocy, blah, blah.” 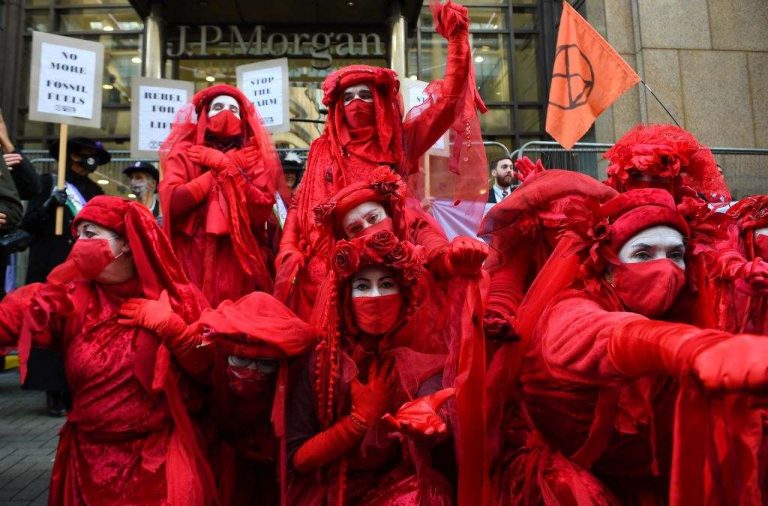 Some of the protesters were dressed in white suits and hoses like the ghost hunters in the movie, with the task of “hunting” the ecoposturetas.

The day before, two agreements began on the list of commitments, but as after previous climate summits, there is no guarantee that they will be fulfilled.

One of them focused attention on methane emissions for the first time, through an agreement to reduce emissions of this gas by 30 percent by 2030, which has a global warming potential between 30 and 80 times higher than carbon dioxide, according to press releases.

The Global Methane Pledge has been signed by more than 100 countries and launched by the United States in September. The coalition around the proposal won the support of the 103 participating governments at the summit, whose emissions account for 46 percent of the total annual emissions of this pollutant.

Observers pointed out that the agreement is not binding, so its implementation will depend on the goodwill of the governments.

Earlier, participants in the meeting on Tuesday agreed to an agreement setting, for the first time, an expiration date for deforestation.

The commitment is to end the extensive logging of the world’s forests by 2030, along with financial contributions to reforest the world’s major green ecosystems.

Hence the hope that governments will mobilize $12 billion in the next decade to restore symbolic spaces like the Amazon, and $7 billion that the private sector will provide, not counting other pledges of contributions.

On the streets on Monday, protesters warned against empty shows, as EFE described.

“We have many ecoposturetas to suck with our pistols, to reveal the truth later,” said one of those mobilized. He added that governments and companies use “a lot of talk and little real action”.