The fires burned from morning until dark. Photo: Ansa.

At least 60 people were injured during a major fire that included about 500 tank trucks loaded with fuel And natural gas on the Iranian-Afghan border. The resulting fire, explosions and cloud of smoke are now visible from space and captured by NASA satellites.

The disaster, the causes of which are not yet clear, occurred at the Islam Qala border crossing in the Afghan province of Herat. Authorities in both countries stated that one of the tanks exploded and the fire spread to several other trucks that were parked nearby.

Although there appeared to be no deaths, the estimated damage was around $ 50 million, according to an estimate by the Afghan Chamber of Commerce. The fires continued to burn for hours.

The first consequence of the fire, which raged from morning until nightfall, was the severance of the line carrying electricity from Iran to Afghanistan, leaving Herat in the dark.

The road between the city of Herat and the border point of Islam Qala (120 kilometers away) is a dangerous stretch of road that Afghans rarely travel at night for fear of attacks by criminal gangs. Taliban groups also move freely in the region.

After the fire broke out, Afghan security services set up checkpoints and assisted ambulances and emergency vehicles to travel to and from the border crossing.

The United States allows Afghanistan to import fuel from Iran as part of a special concession that exempts Kabul from complying with US sanctions against Tehran. 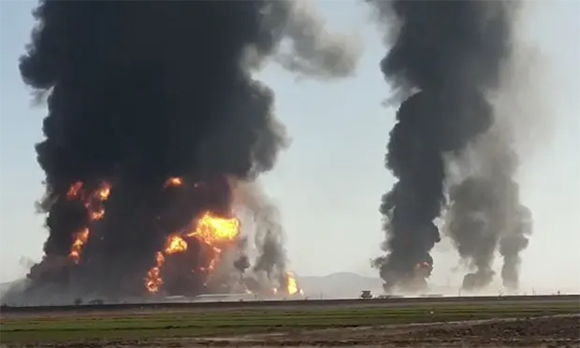 Fire, explosions and a smoke cloud have been detected by NASA satellites. Photo: Reuters.

(With informationOhN from ANSA and Watchman)