Hundreds of flights have been canceled on Christmas Eve and Christmas 2021 due to significant coronavirus infections among airline employees (Shinji Kita / ASSOCIATED PRESS).

More than 7,000 flights were canceled worldwide this Christmas weekend, and thousands more were delayed due to the omicron type of coronavirus. According to tracking website Flightaware, adding to the pandemic’s frustration.

About 2,500 flights were canceled around the world on Christmas Day, including about 850 flights to and from airports in the United States, and about 2,400 on Friday. By Thursday, cancellations had already totaled 2,231.

Meanwhile, about 2,000 flights were canceled this Sunday, of which more than 570 were related to the United States, both international and domestic.

Several companies consulted by AFP mentioned the reason for the cancellation The new wave of the pandemic, which especially affects crews. Pilots, flight attendants and other staff have reported falling ill or having to go into quarantine, forcing many airlines to cancel flights during one of the peak travel periods of the year.

Most flights were scheduled before the advent of omicron, which is more contagious than previous variants.

For example, United Airlines canceled 439 flights on Friday and Saturday, 10 percent of scheduled flights, according to FlightWare. “The peak in Omicron cases across the country this week has had a direct impact on our crews and the people running our operations,” the company, which said it was looking for solutions for affected travelers, said.

Delta also canceled 280 flights on Saturday and about 170 on Friday, due both to omicron and poor weather conditions, albeit to a lesser extent.

See also  Do COVID-19 vaccines need WHO approval before they can be used? ›Cuba against Covid-19 › Granma

More than 11 flights in Alaska were also canceled, and some of its employees said they “may have been exposed to the virus” and had to self-isolate.

In the case of the United States, the situation also reveals a battle between managers of major airlines and unions.

In response to the pre-holiday chaos, airlines this week sent a letter to Rochelle Walinsky, director of the US Centers for Disease Control (CDC), asking them to ease the isolation period that vaccinated people must meet. virus for ten to five days.

Under pressure from American Airlines Group, which represents Delta, United and American, the Flight Attendant Association (AFA) sent Walensky a letter to maintain the 10-day schedule.

Chinese airlines accounted for the largest number of cancellations: China Eastern canceled about 540 flights and Air China 264, in both cases more than a quarter of all scheduled departures.

(with information on page 12) 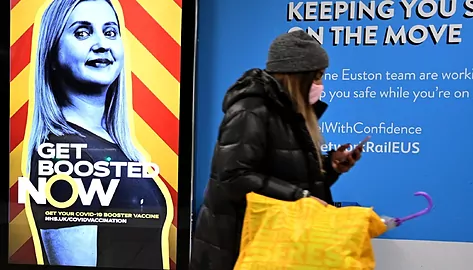 A woman walks past a vaccination poster in London. Photo: EFE.

The British government is studying the possibility of mobilizing “door to door” Covid vaccination teams as an alternative to implementing new restrictions against the spread of the omicron variant, Responsible for increasing the daily cases to 122,196 recorded over the weekend.

As The Mail on Sunday revealed, Boris Johnson is considering extending the “door-to-door” pilot program launched in Ipswich, Suffolk County, to other areas with lower than average vaccination rates in England.

For a month, special teams from the National Health Service (NHS) toured areas such as Westgate in Ipswich, with one of the lowest levels of vaccination in the country, trying to persuade reluctant neighbors and offer free transport to health centres. Vaccination. In other areas, such as Norfolk, teams of “community vaccinators” have been deployed knocking on door for the same purpose.

Boris Johnson is due to announce the next measures against Covid on Monday in light of the year-end celebrations, in the face of mounting pressure from the hard-line wing of the Conservative Party not to impose new restrictions. Nearly a hundred Tory MPs rebelled a week ago against the introduction of a “Covid passport” to enter nightclubs and stadiums.

Introducing new restrictions would require Parliament to convene in the middle of the Christmas recess and would expose the prime minister to greater opposition within his own ranks, in the midst of a political crisis over the Partygate scandal (Covid parties held in Downing Street during the restrictions 2020). The Speaker of the House of Commons, Labor Lindsay Hoyle, is in talks with the government to determine whether it is necessary to invite MPs to the meeting.

Johnson is awaiting the latest data on the development of the epidemic. I decided last week not to impose further restrictions in light of an Imperial College London report that concluded that the risk of hospitalization with the omicron variant was up to 40% or 45% lower than the delta variant.

On this occasion, the Prime Minister can count on the double increase (46% and 39%) in the administration of the first and second doses of vaccines in the past week, as well as on the increase in the third dose of the current boosters. It reaches 48% of the population and has exceeded the target of one million vaccinations per day for several days.

Despite being the first European country to begin mass vaccination, the UK has lagged behind other European countries such as Spain. It is estimated that more than five million Britons have not been vaccinated and resistance has been mounting in recent weeks, along with rejection of the new restrictions and criticism of the Johnson government.

(With information from El Mundo)