The Norwegian Forest cat is a popular feline known for its large build, social dispositions, and fluffy coats. While this seems to be the general knowledge most cat lovers know about this breed, there are other facts about the Norsk skogskatt (that’s its name in Norwegian) that will leave you amazed.

Hence, in this article, we will discuss some of these interesting facts. Let’s begin…

1. It is the Official National Cat of Norway

This cat is practically royalty in the country of Norway and this is thanks to King Olaf V. Sometime ago in the 1950s, this king designated this feline as the country’s official national cat. This recognition increased the popularity of this breed.

So, if you ever visit Norway, treat the Norsk skogkatt nicely if you come across one to avoid the ire of the Norwegians. Visit https://www.afsusa.org/countries/norway/ to learn more about Norwegian culture and values.

When compared to most cats, Norwegian Forest Cats will bully others when it comes to size; even certain small dogs will be dwarfed by this feline. Although it might not be as large as the Maine Coon, it is not far behind.

3. It is related to the Maine Coon

This kitty bears striking resemblance to the Maine Coon with their similar sturdy, large bodies, and shaggy tails. The resemblance is almost identical that most folks cannot differentiate one from the other.

The reason for these similarities is that genetic testing has revealed that these two cats are related. The Maine Coon is a descendant of the Norsk skogkatt and an unknown domestic breed that is now extinct.

If you can’t still differentiate between these two kitties, let’s help you out a bit. The Maine Coon’s head is wedge-shaped while the Norsk skogkatt’s face is triangle-shaped.

4. They are Warrior Cats

Yep, you heard that right. The ancestors of this breed traveled with Vikings as they move across Europe. These ancestors were either the Great Britain white and black short-haired felines that caught mice on Viking ships. Or the long-haired felines brought by the 14th century Crusaders into Scandinavia.

Whichever the case may be, it is a fact that these cats stayed with warriors and were cherished for their hunting skill which made them invaluable to the Vikings and the Crusaders.

When onshore, these cats were allowed to roam the forests of Norway as they liked which led to breeding with both barn cats and feral felines. After some time they became the modern Norsk skogkatt we know through adaptation and evolution. 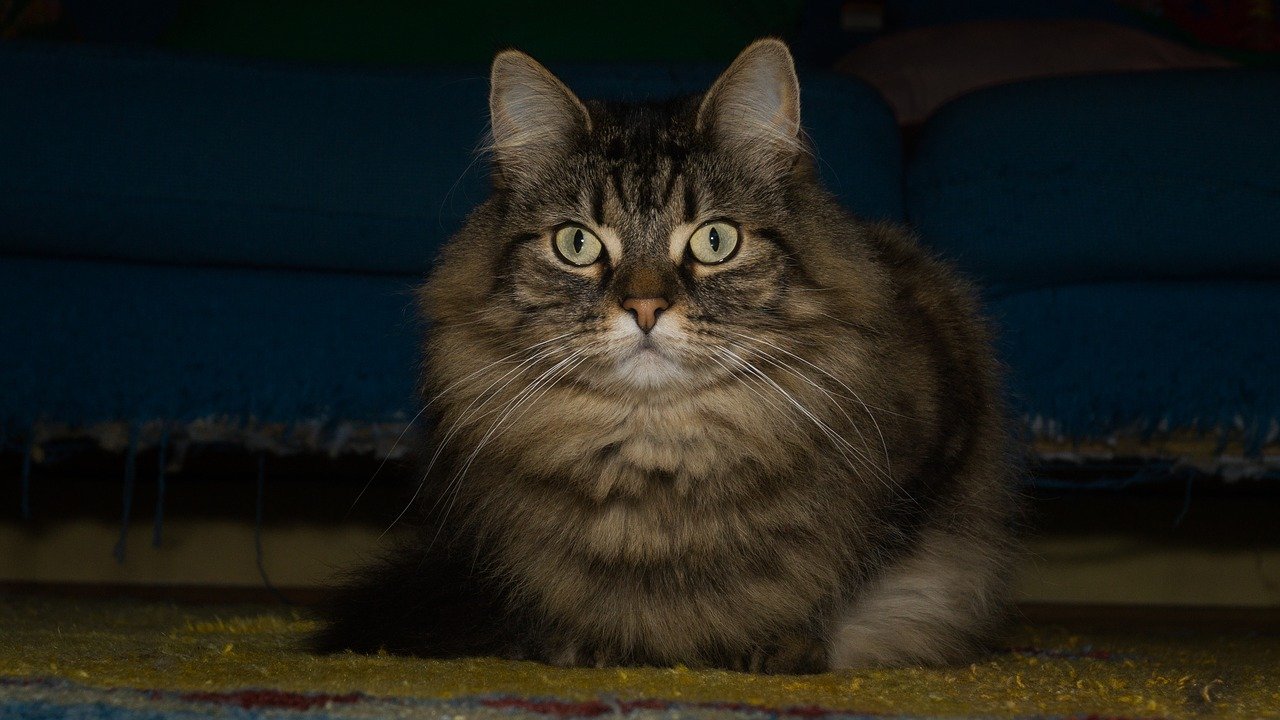 5. They are Creatures of Myth

This fact might seem far-fetched considering these creatures are alive, well, and living among us. Nevertheless, it doesn’t take away the fact that Norse legends tell the tale of the skogkatt. It speaks of a big, long-haired fairy cat that dwells in the mountain and can climb vertical rock faces impossible for other cats to climb.

As a result of the size, coat, and ability of the Norwegian Forest cat to climb trees, many have suggested that it was the inspiration behind the skogkatt (meaning “forest cat”).

According to Norse myth, this legendary kitty was loved by the goddess Freya. Some even go ahead to say that Freya moved around in a chariot that was drawn by the skogkatt.

Another Norwegian tale tells of how Thor lost a strength match to Jormungand who took on a skogkatt disguise.

As a result of these myths, some breeders call the modern-day breed “Norsk skogkatt”.

While sailors and farmers cherished this kitty for its ability to hunt down mice for centuries past, cat enthusiasts and fanciers didn’t notice them until sometime in the 1930s.

When World War II came, this feline was almost driven into extinction as a result of crossbreeding. Thankfully, the Norwegian Forest Cat Club came to the rescue as they established an official breeding program that helped in the preservation of this breed.

The Fédération Internationale Féline which was a pan-Europe federation of cat registries made the Norsk skogkatt an officially recognized breed in 1977. This became a reality thanks to the efforts of the cat fancier Carl-Fredrik Nordance from Norway.

A breeding pair then came to America in 1979 but it wasn’t until 1987 before the American Cat Fanciers’ Association accepted this feline as a breed.

7. They are Excellent Tree Climbers

If you see this feline running headfirst down a tree, you don’t need to be surprised. To these kitties, such an action is as normal as it is for you when you walk.

Their ability to climb trees is the stuff of legend as mentioned in Norse myths; speaking of Norse myths, click here to check out these 10 Viking stories. They have very sturdy claws that allow them to execute certain climbing feats that will leave you surprised.

8. They are loved in Europe

You might think that these cats are only beloved in Norway. The truth is they have lovers all across Europe. The majority of Scandinavians love this feline to the point they are called “Wegies”; this is just a short form for “Norwegians”.

Other countries apart from Norway where these cats are beloved include Denmark, Sweden, Iceland, and even France.

The article above has discussed some interesting facts about the Norsk skogkatt. Which one were you most intrigued about? For us, our pick will be number 5.